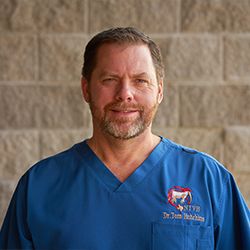 Dr. Hutchins is originally from southwest Oklahoma. He received Bachelor of Science degrees in Biochemistry and Biology from Cameron University in Lawton, OK. He graduated from Oklahoma State University College of Veterinary Medicine in 1999. He also completed a large-animal rotating-internship at Louisiana State University School of Veterinary Medicine with primary emphasis in equine medicine and surgery in June 2000.

After completion of his internship, he began his veterinary career in Salado, TX in an exclusively equine practice performing lameness evaluations, dentistry, and soft-tissue and minor orthopedic surgeries both in-house and on an ambulatory basis. A family decision was made to move to Weatherford, TX in 2004. The next chapter in his career began at Equine Sports Medicine and Surgery working alongside an elite group of veterinarians at its world-class referral hospital and on racetracks across the country. He enjoyed treating and working with some of the finest Thoroughbred and Quarter Horse racehorses from 2004-2013. In 2009, Dr. Hutchins became certified as a Diplomate by the American Board of Veterinary Practitioners (ABVP) specializing in Equine Practice. He mastered a rigorous and demanding application process and certification examination in order to obtain Diplomate status. To qualify to sit for the extensive, two-day examination, a veterinarian must complete either a residency program or six years of clinical veterinary practice. In addition, two case reports, references, descriptions of practice procedures, and professional education records must be submitted and pass review. The American Board of Veterinary Practitioners requires that all Diplomates recertify every ten years to maintain their status. Dr. Hutchins completed his required maintenance of certification in the Spring of 2019.

The work at ESMS required significant time away from home and with the importance of family in mind, it was time to switch gears. The establishment of Silverado Equine Performance, LLC was made. After two successful years as a solo practitioner, he joined forces with Craig Sweatt, DVM of Mobile Veterinary Services and formed what is now North Texas Veterinary Hospital, PLLC.

Dr. Hutchins’ primary focus is on the diagnosis and treatment of performance issues, primarily respiratory and lameness, associated with all breeds and disciplines of performance horses. He also has special interest in podiatry and dentistry. You can also find him working on a few food animals as well.Dr. Hutchins is licensed to practice in Arizona, Florida, Louisiana, New Mexico, Oklahoma, Texas and Washington. He is also a member of the American Association of Equine Practitioners, American Veterinary Medical Association, and Texas Equine Veterinary Association.He is also happily married to his wife Tiffani and has one daughter, Hunter. 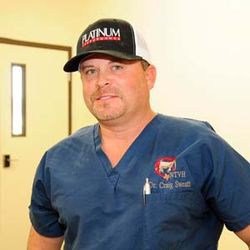 Dr. Sweatt is originally from Plainview, Texas where his family was heavily involved in agriculture. He was involved in both 4-H and FFA and enjoyed successes at livestock exhibitions and shooting sports. Upon high school graduation he began college at Texas A&M University where he earned a Bachelor of Science degree in Animal Science. Upon completion of his B.S. he began and completed a Master of Science in Animal Nutrition at Texas A&M University.

In 2002, Dr. Sweatt moved to Parker Co. and began working at a mixed animal practice until leaving in March 2004. He then formed Mobile Veterinary Services where he went from a few clients to a client list of over 2,000. After 12 years as a solo practitioner, Dr. Sweatt partnered with Dr. Hutchins in forming North Texas Veterinary Hospital, PLLC.

He also assists and consults for numerous ranches in herd health on cattle herds.He is a member of the American Association of Equine Practitioners and the Texas Veterinary Medical Association.

Dr. Sweatt is married to Shannon and has 3 great kids, Ashtyn, Callen, and Alyssa. 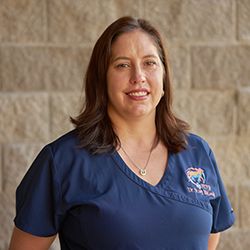 Dr. Stacy McLeod grew up in Piedmont, OK and knew she wanted to be veterinarian from a young age. After high school she earned her Bachelor’s degree in Animal Science from Oklahoma State University in 2000, followed by her Doctorate of Veterinary Medicine in 2004. She then completed a 1 year internship in theriogenology (reproduction, equine emphasis) also at OSU.

She and her husband, Cody, enjoy raising their three girls together. They enjoy their horses, cow dogs, and cats. She also enjoys baking, gardening, making quilts, and practicing other ‘handy’ skills.

Dr. McLeod is licensed to practice in Oklahoma and Texas. 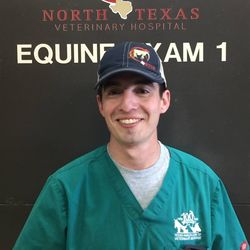 Dr. Agado grew up in San Benito, TX. He earned his Bachelor of Science degree in Biomedical Science and Animal Science in 2009 from Texas A&M, where he was a member of the Corps of Cadets. In 2016, he received his Doctorate of Veterinary Medicine degree from Texas A&M as well. After leaving College Station, Dr. Agado and his wife, Nicole, moved to Chickasha, OK where he began his career as an associate veterinarian at a rural, mixed animal practice in Verden, Oklahoma. While in Oklahoma, Dr. Agado and Nicole welcomed two boys, Cameron and Landry. Wanting to be closer to family, they returned to Texas to join North Texas Veterinary Hospital, PLLC

He enjoys outdoor activities, working with his parents’ Simbrah cattle in south Texas, and spending time with his wife, two boys and his fur babies. 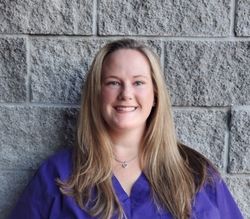 She enjoys outdoor activities and spending time with her husband and her dog, Ziggy. 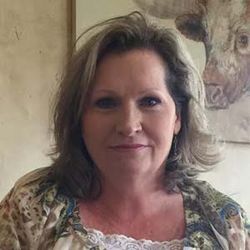 Before joining NTVH as Office Manager, Dianna had 12 years of prior office management experience working in the equine industry. She loves what she does and says the opportunity to work with these Doctors and this staff has been great. She and her husband have been married for 36 years and have lived in Peaster for 15 years.

They are blessed with 3 amazing children and their spouses, and her favorite part … 7 awesome grandsons!! Dianna enjoys cooking, fishing, sports and spending time with family and her boys. 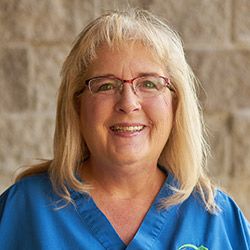 Janine has been a resident of Weatherford for the past 30 years. She brings to North Texas Veterinary Hospital over 13 years of experience in working as a receptionist in the veterinary field. Her love of animals and people is her motivation. Janine has two grown children, David and Sarah, who both graduated from Weatherford ISD. She also has two granddaughters and one grandson, who are the joy of her life. In her spare time, she enjoys working with the youth at her Church, singing and cake decorating. Titan, Tatiana, Max, Tylie, Queso, Ellie and Gracie are her fur babies that keep her busy at home.

We have the best clients and patients at NTVH. Our staff is a pleasure to work with as well. Let me schedule your appointment today!!

Katelyn grew up in Southwest Louisiana and has always had a passion for animals. After graduating high school, she moved to Waco, TX to attend McLennan Community College and receive her Associates Degree in Veterinary Technology. After graduating, Katelyn became a full-time RVT for the 6666 Ranch in Guthrie, TX. In order to further her career, God led Katelyn to Weatherford to begin working for Dr. Craig Sweatt at Mobile Veterinary Services in August, 2013.

She feels blessed to have transitioned into the new team at North Texas Veterinary Hospital. When not at work, she enjoys spending time with family, friends and outdoors with her two ‘dog-children’. 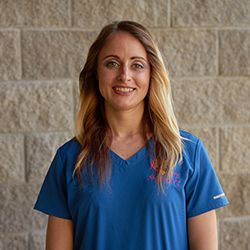 Sierra was born and raised in Northwest Kansas where she spent most of her time at her grandparent’s farm. She always had a devotion for looking after and caring for all the animals. Her family moved to Red Oak, TX where she attended High-school and was very productive in the FFA.

Her passion for animals eventually got her into the veterinary field in 2005. She then pursued her associate degree in applied science through Cedar Valley College of which allowed her to obtain a License in Veterinary Technology. After she moved to the Weatherford area in 2008, Sierra worked the last several years at an emergency veterinary clinic.

Although she thrived with the ER experience her ultimate goal has always been to advance and utilize her skills in large animal medicine. This is what brought her to North Texas Veterinary Hospital when she became a part of the team in July 2017.

Sierra has a very doting husband, Mark, and together they have a charming son, Mason. They live on their little slice of Texas with 2 horses, 2 cats, and their 12 happy egg laying hens.

When Sierra has any free time, she takes the opportunity to visit with friends and family which are all very important to her. She greatly enjoys fishing, hiking, and horseback trail riding. She enjoys all sorts of arts and crafts which ranges from bead work and horsehair jewelry to drawing and photography. 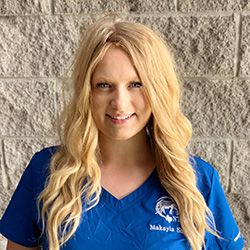 Makayla was brought in by North Texas Veterinary Hospital in early May of 2018. Moving all the way here from her small town in North Georgia she was excited for a new future in Texas. Most of her experience had been in small animal, but she was briefly introduced into the large animal side of things which ultimately led to her search to move and new opportunity.

Makayla moved to Poolville with her 2 horses and her German Shepherd. She enjoys taking her dog for walks and riding in her free time. She hopes to learn a lot from her experiences at North Texas Veterinary Hospital and to start school soon to follow her dream of going to vet school. Her school of choice was always Texas A&M which solidified her decision when she moved. 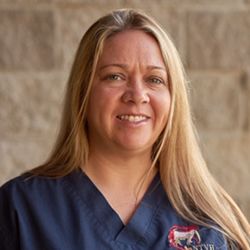 Emilee was born and raised in North Texas where she spent most of her time showing reining horses and competing in rodeo. She was also an active member in her local 4-H and FFA chapters, where she held many official positions and was on multiple judging teams.

Emilee attended Wharton Junior College on a rodeo scholarship to pursue a dgree in equine reproduction. After completing her Associates Degree, Emilee began working at an equine facility focusing on breeding and foaling of Quarter Horses. Wanting to expand her horizons, she followed her passion for all animals into the veterinary field. Emilee became a Certified Veterinary Technician in 2013.

Emilee joined North Texas Veterinary Hospital in December 2018. She currently resides in Weatherford with her daughter and 2 dogs. In her free time, she likes spending time family, friends, listeing to live music and being outdoors.

Becca grew up in Weatherford, TX. She spent her childhood roping, barrel racing, and working cattle on the D-B Ranch in Aledo , TX. During high school, she competed across the U.S. in Rodeo Queen competitions.

Becca went to work in the oil field after high school graduation where she eventually met her husband, Charlie. They have one son, Cash. After time spent together in the oil field, Becca wanted to return home to be closer to her family and pets, so she began her pursuit of being a veterinary technician.

Becca now spends her free time working cattle, occasionally going to a roping event, and teaching her son the cowboy way. Being a veterinary technician is what Becca was always meant to do and would not have it any other way.